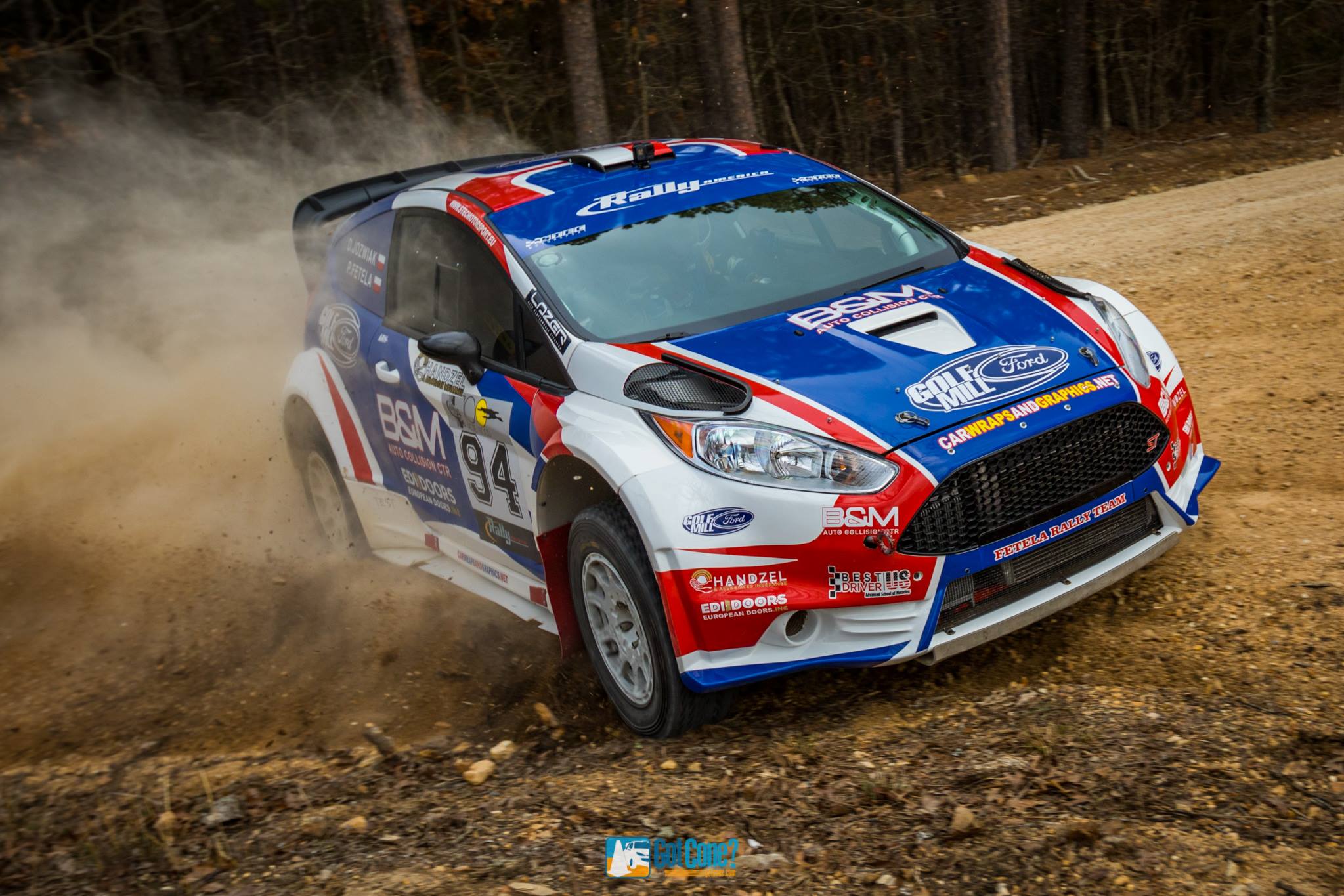 As I left for the 7ish hour drive to Salem, MO on Thursday morning the weather forecast looked beautiful outside of the chance of rain on Friday morning and evening. Thursday was the nicest day of the year so far, a touch above 75 degrees with sunny skies, as I pulled into Salem to check out tech inspection and attend a safety briefing. It was a welcome change from the gloomy skies with temps in the 30s and 40s that have dominated the days leading up to rally. The sun and warm would not hold out for long though.

At tech inspection I got my first up close look at Joseph Burke’s new monster EVO and a monster it was. Not to give away any spoilers, but it was near or at the top of the pack, until they forced to retire on the final stage of Friday night. Fetela Rally Team, making their return to 100 Acre Wood after the spectacular crash 2 years ago, also rolled through tech with the new car, a Ford Fiesta EVO.

Friday morning came early, with shakedown getting started at 8AM. The sunny skies of the previous day gave way to clouds with a forecast for rain early in the day. However the rain did not come, aside from a few sprinkles and if shakedown was any indication of what was in store, there was going to be dust, lots and lots of dust. I got a chance to see both Fetela and the Burke EVO make a few passes during shakedown and they both looked ready for a battle for the top spot.

After shakedown wrapped up, everyone headed to Steeleville for Parc Expose and the ceremonial start of the rally. Burke and co-driver Karen Jankowski quickly showed they meant to challenge Fetela on the first stage, taking the stage win by over 6 seconds. Burke would continue to dominate winning all of the first six stages and jumping out to a nearly 1:30 lead over Fetela going into the final stage of Friday’s competition. Unfortunately that would be the last stage they would start, as they suffered a mechanical failure on the seventh stage of the day and were forced to retire from the rally.

This left Fetela in the lead ahead of Justin Pritchard/Rachelle Kaltek, just 14.5 seconds behind, and Tim Rooney/Anthony Vohs who sat another minute and half behind Pritchard going into Saturday the final day of the rally. There was also quite the battle shaping up in the 2WD class between Seamus Burke/Martin Brady in their JRD Rallysport MK2 Escort and Michael Hooper/Claudia Barbera in the River City Rally Lexus IS350, both sitting in the top 10 overall and less than a minute separating the two at the end of the first day.

Saturday kicked off with the traditional Parc Expose in downtown Salem, MO. Fans crowded the streets to get up close and personal with the cars, the drivers and co-drivers. The night before had brought just enough rain to cut down the dust some, but the wind was going to make it a chilly day.

The second stage of the day featured the famous Cattle Guard jump. The stage had been cut short both of the last two years, so lots of the drivers were itching to get their crack at sending their car soaring through the air over the famous jump. Two years ago, we all remember the infamous crash by Fetela that sent his car hurtling through the air end over end, causing the stage to be shut down. Last year the stage was red crossed after just a few cars as a local sheriff needed to access the road. This year there was nothing to stop the stage from concluding, so everyone got to take a crack at the jump. A few drivers may have gotten a little over ambitious and sent it over the jump a little too much, causing damage to their car and forcing their retirement from the rally, including the Porsche on Regardless Porsche 944 of Robert Pepper and Mical Davis. The award for biggest air is too close to call, even in a photo finish between the VW Jetta of Micah Nickelson/Tyler Ptacek and the Subaru Impreza of Whiskey Throttle Rally Team, Nate Ellis/Elliot Sherwood, who both definitely sent it.

Justin Pritchard and Rachelle Kaltek jumped ahead of Piotr Fetela and Dominik Jozwiak early on Saturday before suffering a head gasket failure in their Subaru and were forced to retire after stage 11. Fetela and Jozwiak then settled in with a more than 2 minute lead over Rooney and Vohs with just five stages left and cruised to victory extending their lead to 3 minutes by the end of the day. Fetela couldn’t have asked for a better way to make his return to the winding roads of Missouri and the Rally in the 100 Acre Wood.

Cameron Steely and Preston Osborne took the final podium spot in their first time in an AWD vehicle, finishing under a minute behind Rooney. Seamus Burke and Martin Brady were able to fight off Michael Hooper and Claudia Barbera taking the victory in 2WD and finishing an impressive fourth over all. Nathan Usher and Marianna Langosch walked away from the competition, taking the win in Open Light and finishing 7th overall.

Next up on the Rally America schedule is Southern Ohio Forest Rally on May 18 & 19th.